How different things could have been...

Genuinely an 70 goal season in all comps with these three, gonna be fun watching them.

Beni said:
How different things could have been...

That sent a chill down my spine.

Could be really unbelievable if Bale can fire on all cylinders.

On today’s evidence, with Kane dropping deep and spinning world class through halls in behind, it’s going to be fucking immense.

If we can start passing the ball from front to back occasionally we’ll be a force to be reckoned with.

Id actually start Lamela next to Hojbjerg with GLC or Ndombele the other side. He's a vicious bastard in midfield, unlike Winks, and can see and execute a forward ball quickly, unlike Winks.
I think we'd be stronger defensively and attacking with him in there instead of Winks.

King of Otters said:
If we can start passing the ball from front to back occasionally we’ll be a force to be reckoned with.
Click to expand...

Thats where the problem lies.

JM said ' You need to be dirty clever ****.' And everyone looked at Lamela.
'What?' said Lamela lol.

What if Bale just gets in their way - kind of like a world class Lucas Moura? 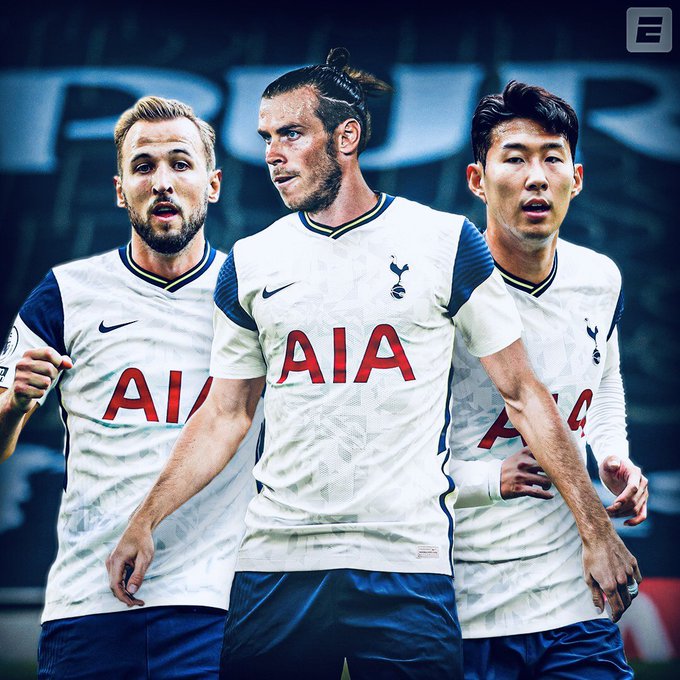 King of Otters said:
On today’s evidence, with Kane dropping deep and spinning world class through halls in behind, it’s going to be fucking immense.

If we can start passing the ball from front to back occasionally we’ll be a force to be reckoned with.
Click to expand...

Kane's evolution to vintage Glenn Hoddle is something to see.

My body is ready. Just hope I can get back into the ground eventually to see it up close.

That’s frightening to me, can only imagine what opposing fans feel about it.

The only issue I'd have is who'd lead the press, but then we don't press properly nowadays anyway

In possession and with a fully fit and firing Bale that is the best front three in the league.

Has a "Massive Member" Member

I can see Kane as a false 9, would be awesome.
P

Donki said:
I can see Kane as a false 9, would be awesome.
Click to expand...

I think his passing and eye for the right ball have been underrated for a long time. He definitely has it in him to be a creator.

It's the thought of Reguilon and Doherty combining with Son and Bale on each wing and running at defences that has me drooling. We haven't had that kind of attack across the pitch for a few years.

Marty said:
The only issue I'd have is who'd lead the press, but then we don't press properly nowadays anyway

In possession and with a fully fit and firing Bale that is the best front three in the league.
Click to expand...

I don't see the problem with us not pressing at the moment especially full on while we're in the fixture congestion we are.

Kane today played like a better version of Roberto Firmino except he also scores goals. If we can add that to our "Salah and Mane" in Son and Bale then we'll be a hugely potent threat this season.

That being said - the way I am reading things on here and Twitter I think some of you are going to be very disappointed with Bale's return. World class he certainly was, but even in an environment where he "feels loved" etc etc etc - he may well not get anywhere close to what he once was, and even though I'm sure he is still a top technical footballer then his injury record means there's a good chance we only see him fit and in good form for a handful of games in the season which would make any discussion of 70 goal hauls from the trio borderline delusional - Kane has had his own injury issues of course.

Son, Kane and 2013 Bale would without question be the best front three in the league. Probably even 2018 Bale as well. Now - I'll wait and see what player has arrived before declaring our front line better than Liverpool's or City's.

Lastly - I think today is going to be an outlier rather than a taste of what's to come. Some superb individual performances today from Son and Kane, with Ndombele and a few others having flashes of brilliance, but don't let the scoreline fool you - we were lucky not to lose, let alone come away with an emphatic win, after struggling badly but being gifted goals from a suicidally high Southampton line. Credit to Mourinho for spotting it and setting up Kane and Son to take advantage in the second half - but I guarantee that most teams will not be this open especially when Bale is in the side - so we are going to have to learn to beat our achilles heel - well organised teams defending deep. Ndombele's improvement and the addition of attacking full-backs might give us that ability but we'll see.

To end on a high though - what really impressed me was how clinical we were today. All of the goals, those that counted and those that didn't, were examples of brilliant finishing and a killer instinct when they gave us hope - compared to say Adams who had the chances to win the game for them but was wasteful. If we dominate the midfield battles and can supply this front three then we'll have a good chance in any game.

Beni said:
How different things could have been...

I remember in 2015 the Bundesliga reporter of Norwegian Eurosport claimed that Son had already reached his limits and best level, and he had his doubts on Son being able to improve Spurs.. (Just like a Norwegian music journalist in US in 1987 who saw GNR in concert and wrote that that band had no future..)
You must log in or register to reply here.
Share:
Facebook Twitter Reddit Pinterest Tumblr WhatsApp Email Link
Top